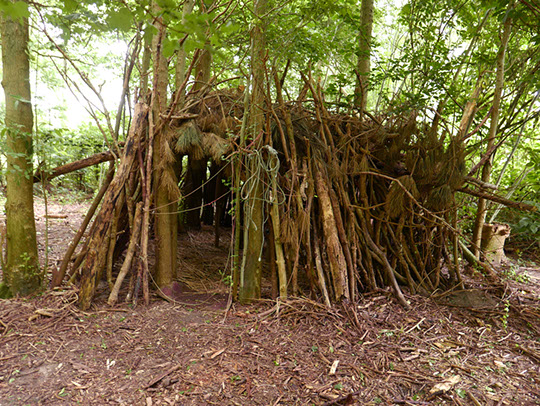 Approaching Dishoek as an outsider and a Brazilian tourist, Juliana Holanda Bonomo looked for places with some kind of soul: spontaneous places, without rules or exhibition posters, which can free your imagination and reveal the singularities of the people that intervened in them.

The bunker is a ruin, initially meant for military protection from the outside. It’s an alien object in the landscape, calling up ‘bad’ memories from the past. How much of this history should be preserved and how much of it should be repurposed in order to allow for a new sense of ‘being here’?

Is the hut an escape from the planned neighborhood of Dishoek, or from parental control? What if it is a space of confinement, to retreat from the world around? In contrast with the regulated touristic accommodations, built to please outsiders and aseptic to flexibility, this hidden hut is a spontaneous place that expresses freedom. Here, informality and appropriation allow for original and unexpected ideas to emerge.

Juliana Holanda Bonomo is a Brazilian designer with a strong interest in sustainability and communities of practice. She currently completes a Masters degree in Industrial Design at the University of Twente.